Milan is known as the economic and production capital of Italy and the leading Italian hub for services, finance and industry. Milan is the engine of the country's economy and home of the Italian stock exchange. This cosmopolitan, modern and forward-looking city is world-renowned as a European capital of fashion, design, architecture, finance, publishing, modern art and music. It is deeply rooted in a flourishing past and hosts authentic treasures which have survived damage during WWII, including its elaborate cathedral, Leonardo da Vinci's The Last Supper, the La Scala opera house and Castello Sforzesco.

Milan has a young and vibrant soul and each year several festivals, concerts and sporting events take place in the city. 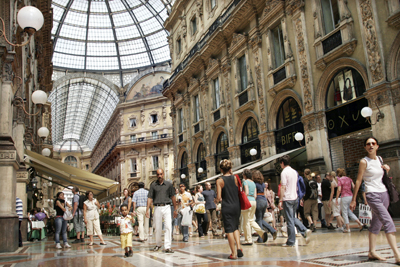 Fast Facts About Milan and Orientation:

In September weather can be very pleasant in Milan, with average temperatures between 11°C and 24°C, but variable at the same time. November is particularly humid and foggy and very often a thick white mist covers the city.

Winters in Milan are generally cold, humid and foggy. Occasionally, especially in January, temperature can fall below freezing, getting down to -10°C with some snow.

Spring usually comes by March with temperatures that climb to 15°C and over. Spring is comfortably cool but it is also the rainy season, therefore the weather can be highly changeable.

Summers in Milan are usually warm and humid: July and August in particular can be very muggy with temperatures which tend to stay around 30°C or more. August is vacation month for the locals and many shops and offices are closed.