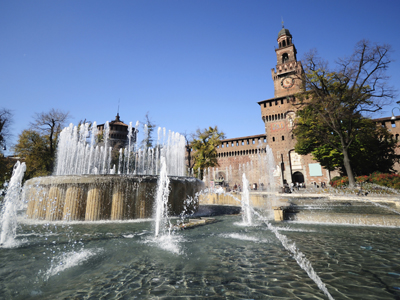 For many generations, Milan has been the birthplace of vibrant new ideas about fashion, art, industry and finance. From imposing gothic structures to challenging contemporary art, centuries of creativity live here.

Italy's financial capital is a blend of history and modernity, towering structures and picturesque parks, exclusive performances and free concerts and events.

Here is a taste of what makes Milan unique:

A Gothic Glimpse of the Past

As it flourished in the Middle Ages, Milan became home to iconic gothic art and architecture. The centerpiece of that era is the Duomo di Milano, one of the world's largest cathedrals. While construction started during the Visconti dynasty in 1386, it was six centuries before Napoleon completed its breathtaking facade. Located at the heart of the city, the Duomo is studded with more than 3,400 statues, and its marble roof offers stunning views of the city and the Alps. It also hosts concerts and cultural events, often featuring music played on its incredible 15,000-pipe organ.

Home to the Masters

Milan is home to paintings and sculptures by the world's most renowned artists. The church of Santa Maria delle Grazie holds Leonardo da Vinci’s The Last Supper, a beautiful and innovative masterpiece. The newly renovated Pinacoteca di Brera hosts a collection of works by legendary figures such as Caravaggio, Raphael, Mantegna, Bellini, Canaletto, Rembrandt, Goya and many others. Top-flight international exhibitions tour through the Palazzo Reale and the MUDEC Museum.

Re-discover the breakthroughs and art that helped to shape our era. Milan's impressive Museo Nazionale della Scienza e della Tecnologia houses early versions and sketches of many familiar inventions, from actual steam trains and submarines to da Vinci's engineering sketches. In the Museo del Novecento, 20th Century artists such as Boccioni and Marinetti guide visitors through Italy's recent past, from the dawn of futurism to abstractionism, surrealism and beyond. A perfect venue for large-scale contemporary installations is found in the huge spaces of the Hangar Bicocca. The University's own Bocconi Art Gallery embraces art and creativity from a variety of different cultures, dotting the campus with the works of world class artists, individually and in exciting collaborations.

Immerse Yourself in Culture

The gorgeous 2000-seat Teatro alla Scala, one the world’s leading opera houses, was the premiere venue for works by masters such as Verdi, Puccini and Rossini, and features one of the largest stages in Europe. Milan’s classical music scene is very robust, with three major orchestras and numerous choral and chamber groups – not to mention Bocconi’s excellent piano concert series.

Milan's Natural History Museum regularly hosts exhibitions, and has fascinating permanent displays on zoology, paleontology and botany. A number of smaller museums and villas contain private art collections and fine handcrafted furnishings, objects and décor. Milan is home to many festivals throughout the year, from the historic Corteo dei Re Magi to the World Press Photo exhibition.