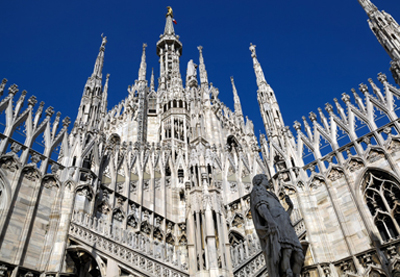 In addition to being the hub of business and financial activities in Italy, Milan is also attractive as a cultural centre. A look at the windows of the elegant downtown shops confirms its position as a world capital of fashion and design. Milan’s vibrantly modern outlook is cast in a context that began in the seventh century BC as a Celtic settlement.
Since then, the city has been destroyed and rebuilt at various points in its history, and it is a miracle that so many historic treasures survive, including Leonardo da Vinci’s Last Supper.

Its museums, ancient churches, historical sights (Castello Sforzesco) and cultural institutions (La Scala opera house) offer great opportunities for visitors. From the 14th century Cathedral (Duomo) at the very heart of town to the nearby alpine lakes and peaks, there are countless ways to experience an unforgettable and multifaceted holiday in and around Milan. For the enthusiasts, the Ambrosiana Library, established in 1607 by Cardinal Federico Borromeo was the third library ever opened (in 1609) to the public, after Oxford (the Bodleian) and Rome (the Angelica).

How to get to Milan

Milan can be reached from all the European and non-European capitals thanks to the modern international hub of Malpensa Airport and the Linate Airport, and the minor airport of Orio al Serio (Bergamo).
For many European participants, Milan can easily be reached by train and by car as well. High speed trains connect Milan and Rome (3.5 hours), and Milan and Venice (1.5 hours).

3) VENUE FOR BOTH DOCTORAL CONSORTIUM AND ICIS CONFERENCE 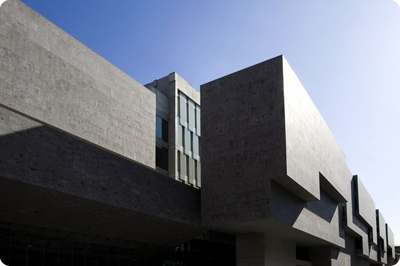 Striking forms, suspended spaces, natural lighting, materials are drawn from the local tradition and adapted to a contemporary style.

Università Bocconi's new building, located at the corner of viale Bligny and via Roentgen, is the fruit of a project by Dublin-based Grafton Architects and it was officially inaugurated on 31 October 2008.

The new building houses the offices of the entire Faculty, with its Departments and Research Centers. Its underground levels include, in addition to the new Aula Magna, a 1000-seat theater, seminar rooms, a spacious foyer, an exhibition area and parking. It will be the main hub for ICIS 2013 together with the attached classroom buildings of the University that provide abundant room capacity for the Conference. Bocconi lecture schedules in December 2013 will be arranged compatibly with the room requirements of ICIS.

Grafton's Design
From an architectural point of view, the design hinges on two basic ideas: floating volumes and diffuse natural lighting. The floors of the Grafton building do not rest on pillars, but are hung by steel cables from large roof beams, a structural principle similar to those used for bridges. The effect is a succession of open spaces, stairs and concrete elements that seem suspended in the air. The visual impact is further lightened by the generous presence of wide glass panels and openings that convey natural light down to the basement.

The Location
The entrance faces Viale Bligny, a lively urban artery, and it is precisely here that the Aula Magna is located. It is a public place and its accessibility from the busy street underlines the ties between Bocconi and the city. The impressive plate glass wall that visually connects the main foyer and the hallway is like a window onto Milan. This broad passageway stretches to accompany the visitor into the heart of the building in a virtual overlap of university and urban life, marked also by the grey color of the surfaces.

Università Bocconi
Università Bocconi, founded in 1902, was the first Italian university to grant a degree in economics. For a century, Bocconi has played a leading role in Italy's social and economic modernization. It has remained true to its founding values of being a major research university, with democratic values and open to the world, as well as financially and politically independent. Today, Bocconi is a research university of international standing in business, economics, and law. Its research projects are funded by national and supranational institutions. By virtue of being a major node in the European and global network of business and economics universities, Bocconi exchanges faculty and cooperates on large projects with like-minded European and American universities and business schools. Bocconi has close relations with major corporations and international agencies, as well as their managers and officials, and constantly interacts with the business and economic environment to assess new issues, implement new techniques, and start new research endeavors. Bocconi grants Bachelor, Master of Science, and PhD degrees in Management, Economics, and Law. It also offers a number of post-experience programs, and administers hundreds of advanced courses to managers and professionals in all realms of private and public management. Leading representatives of the Italian economy, entrepreneurs, company leaders, bankers and politicians graduated at Università Bocconi. The President of Università Bocconi is Prof. Mario Monti, former European Commissioner.

The City of Milan periodically hosts major public events and trade fair shows. The hotel offer can fit all needs. Block reservations for ICIS 2013 participants and accompanying persons will be made at special rates in several hotels of different categories nearby Bocconi and in the city center (the Bocconi Grafton building is at 1.3 km walking distance from the Duomo Cathedral, downtown Milan).

Our pre-selected list of hotels will include information about daily charges and distance from the conference venue. Availability for December 2013 is guaranteed, since major fashion events and trade fair shows usually book room capacity in earlier moments of the Fall season. An example list of hotel availability, with detailed information on facilities and services, offered in previous academic conferences held at Bocconi is provided.